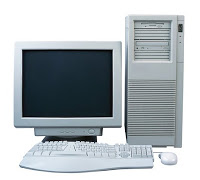 Computer, which change the working and thinking of Human.As computer step into this World it spread like a virus that every single human effect from it.No one in this world is without computer.

But Computer itself use to do nothing.It is a Machine like other machines.Then what make it so popular? All aspects needed and included in this machine no matter software or hardware all having boost up business today.This machine changes it shape according to the era and time.From the Building to a Floor,then to Cupboard and on Desktop.

The journey not end here.Many thing in this world grow big day by day but only this thing getting smaller and smaller at every improvision. It's come now on top of people's Lap, so called Laptop.
Now it took place on people's hands in the form of Tablets.Some or i may say all Cellular companies now providing every features of computer in there cellphone.
So far no more Desktop now popular and some how laptop also getting little low rank in popularity.Till now we talk about the appearance or i may say outlook,in computer diction the hardware of Computers.
To give life to this machine we need to have some sort of Software that run on machine and make it ALIVE.

For this we use LANGUAGES.As human need language to interact.So, computer also have some Languages through which we do Programming and make